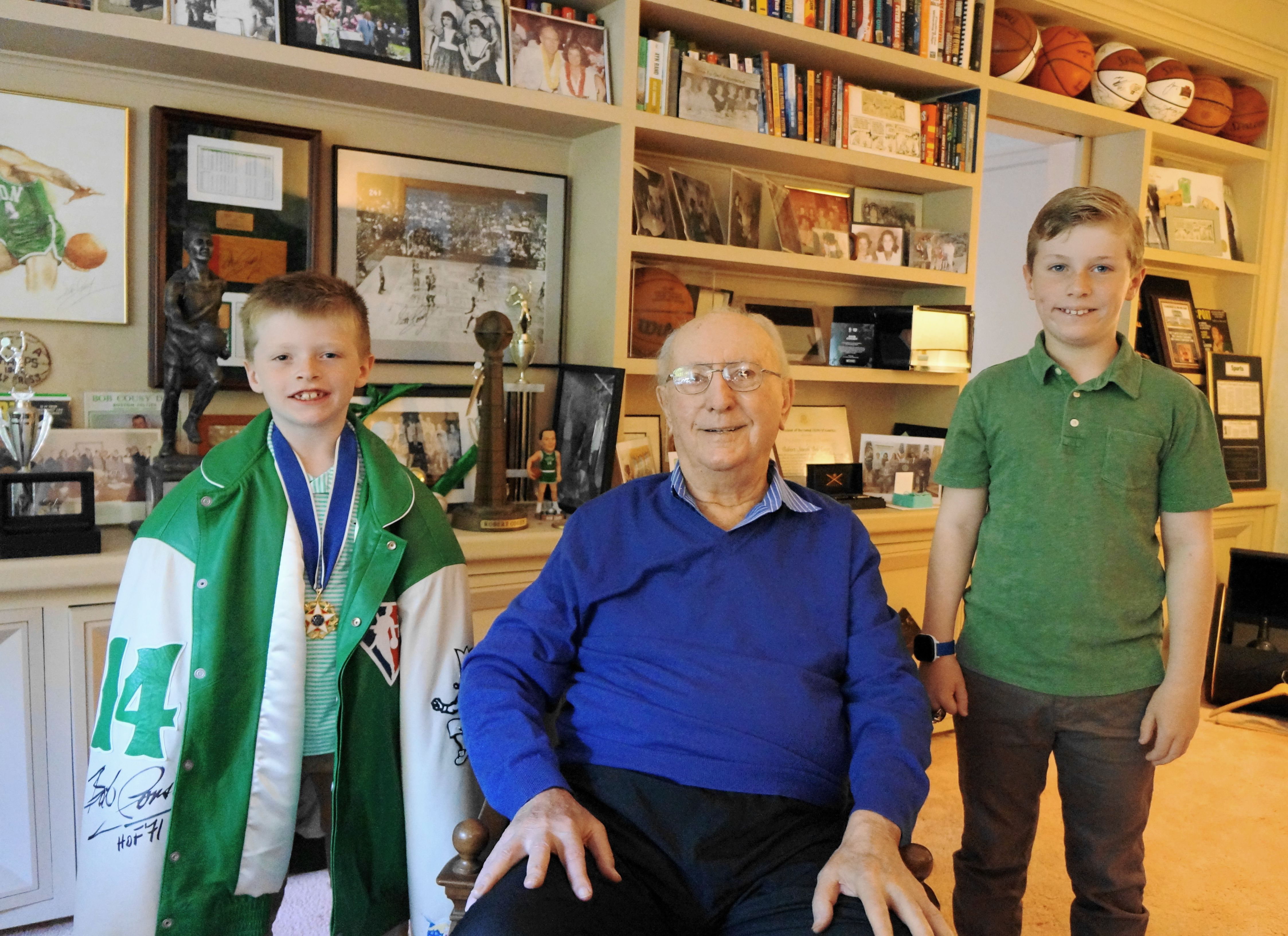 WORCESTER — Bob Cousy has always assisted others. As a Celtics point guard, he led the NBA in assists for eight consecutive years, helping his teammates score and his teams capture six NBA championships.

More importantly, off the court, he has helped out many worthy causes and the nonprofit Big Brothers Big Sisters of Central Mass. & Metrowest has held a special place in his heart for a long time.

Cousy helped found the mentoring organization’s chapter in Worcester in 1963 by raising funds and has been involved ever since. He served as a Big Brother to three young men from Worcester and was honored nationally as Big Brother of the Year in 1965.

Even though he’s 94 and not in the best of health, Cousy continues to do what he can to support Big Brothers Big Sisters.

He came up with the idea of auctioning off a meet and greet at his Salisbury Street home, and the opportunity to pose with him and his statue in front of the Luth Athletic Complex at his alma mater of Holy Cross. All proceeds would go to Big Brothers Big Sisters.

On Saturday morning, Bob Atchinson, 65, of Boston, and his two grandsons, William, 9, and Teddy, 7, of Winchester, spent an hour with Cousy before police escorted them all to Holy Cross to take photos.

Atchinson declined to say how much he bid during the auction conducted last spring by Lelands Sports Memorabilia and Sports Card Auctions of Matawan, New Jersey, but a minimum bid of $25,000 was required to be accepted.

Including donations from others who wanted to honor Cousy, Big Brothers Big Sisters of Central Mass. & Metrowest ended up with $65,000, according to CEO Connie Askin.

Cousy said he was touched that his friend Joe Eid made a sizable donation shortly before he died at age 96 last spring.

So during their meet and greet, Atchinson and his grandsons asked Cousy first about his 2019 Presidential Medal of Freedom and the Big Brothers Big Sisters before they got around to basketball questions.

“You see somebody who has that kind of impact,” Atchinson said, “in a sport, but way beyond the sport, I really wanted to meet him. So that was a thrill.”

“I’m very pleased with the way it went and I didn’t collapse once. That’s the good thing,” Cousy said with a smile.

Cousy wasn’t sure the meet and greet would take place after he was hospitalized in August, the same month he turned 94. He underwent three surgeries, one to blast away kidney stones and two to clean out his prostate. He spent three weeks at UMass Memorial Medical Center – Memorial Campus and three more in rehab at the Jewish Healthcare Center on Salisbury Street.

Visiting nurses and physical therapists took care of him at home for another four weeks. His surgeon recently gave him a clean bill of health and he continues to exercise.

He walks with a walker, but he has resumed getting together with his friends once a week at the Worcester Country Club.

“I know that my story is I’m 94,” Cousy said, “and I’ve got my marbles and I sound like I’m ready to get into the marathon, but the reality is I have to use my walker and 90% of my time is spent sitting in a chair. But I’m still functioning.”

He still receives 20 to 25 letters from fans each day, and he donates to Big Brothers Big Sisters the $1,000 to $2,000 he receives each month for autographing items.

Both Holy Cross and Big Brothers Big Sisters mean a lot to Atchinson. He served on HC’s Board of Trustees for eight years in the early 2000s and his son, Dan, who is the father of William and Teddy, graduated from HC in 2005.

Dan played lacrosse at HC and everyone on his lacrosse team became Big Brothers.

“He said it was as important as anything he learned in school,” Atchinson said.

Atchinson also got involved in the mentoring organization and has been a big supporter of the Central Massachusetts chapter over the years.

When Cousy told his daughters, Marie and Ticia, about his idea to auction a meet and greet at his house to benefit Big Brothers Big Sisters, they were touched.

“He’s still engaged and thinking how he can give back,” Ticia said.

Atchinson and his grandchildren posed for photos with Cousy next to his Bob Cousy Award trophy, which is presented to the top point guard in college basketball each year.

The grandchildren enjoyed trying on Cousy’s Presidential Medal of Freedom and his NBA 75th Anniversary Team jacket even though the latter was far too big for them. Cousy gave the grandkids a couple of his Holy Cross bobbleheads and a pack of his basketball cards. He signed his rookie card and he autographed Atchinson a copy of “The Last Pass: Cousy, Russell, the Celtics, and What Matters in the End,” a 2018 book by Gary M. Pomerantz.

Wearing of the green

William wore a green shirt and Teddy wore a green-and-white striped shirt because they’re Celtics fans. Fittingly, green is the signature color of Big Brothers Big Sisters as well as the Celtics.

Teddy records Celtics night games and watches them the next day. He has even watched old videos of some of Cousy’s games.

Teddy and William expect their friends at school to be jealous when they tell them they met the Celtics legend.

Cousy’s résumé is legendary. At HC, he was a freshman guard on the 1947 NCAA championship team and a three-time All-American. With the Celtics, he won six NBA championships and was voted NBA MVP in 1957. He defined the point guard position and is one of only four players who have been named to all four NBA anniversary teams, for the 25th, 35th, 50th and 75th anniversaries.

Last spring, the NBA named the Eastern Conference championship trophy the Bob Cousy Trophy and he was thrilled that the Celtics became the first team to win it.